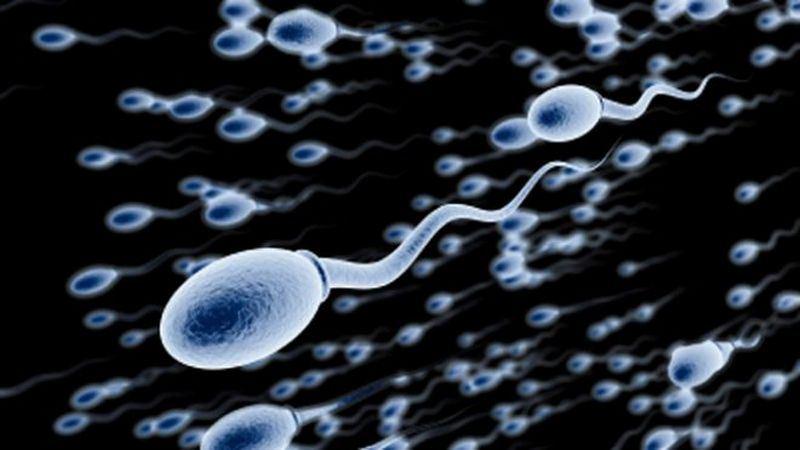 A spermatozoon is a mobile male reproductive cell (or gamete) involved in sexual reproduction. During fertilization, the sperm unites with an egg or an oocyte (female gamete) to form an egg cell, which will then develop into an embryo to give a new individual. This is how the Dawasanté experts provide you with a natural treatment to treat your problems with sperm abnormalities (oligospermia, necrospermia, asthenospermia, teratospermia, azoospermia, etc.).

Click on the image below to discover this natural treatment

The possible link between male infertility and chromosomal abnormalities in spermatozoa has been explored in several studies, since the advent of the technique of fluorescence in situ hybridization (FISH).

Chromosomal abnormalities in humans may be responsible for infertility. In fact, the prevalence of abnormalities detected in the blood karyotype is ten times higher in infertile men than in the general population, ie around 5.3%, versus 0.6%. Numerical and structural abnormalities of the sex chromosomes are found with a high frequency, especially in men with severe azoospermia or oligo-astheno-teratospermia (OAT). The treatment of choice to remedy male infertility with OAT is Medically Assisted Reproduction (PMA) by  Intra Cytoplasmic Sperm Injection  (ICSI). However, it has been reported in recent years that the rate
of aneuploidy (abnormal number of chromosomes) of the sex chromosomes and de novo structural chromosomal abnormalities of paternal origin is higher in the offspring of these men. The risk of transmission of a chromosomal abnormality to offspring as the natural process of sperm selection is bypassed by the ICSI procedure should therefore be carefully considered and evaluated.

Karyotypic analysis of spermatozoa makes it possible to determine in what proportion the gametes themselves are carriers of chromosomal abnormalities, in particular in infertile men.

In 1978, Rudak et al. described a technique for the karyotypic analysis of spermatozoa, based on the in vitro penetration of the latter into hamster oocytes. This technically heavy and delicate technique was only successfully practiced by a dozen laboratories around the world.

The technique of FISH (Fluorescence In Situ Hybridization) and its developments now make it possible to perform the chromosomal study of spermatozoa and analyze a large number of cells, using chromosome-specific probes that hybridize to particular regions of the DNA and can then be detected visually using a fluorescence microscope. For the FISH study, sperm from an ejaculate is spread on slides and undergo a chemical treatment resulting in the decondensation of their heads, while maintaining the structure that distinguishes them from other cells that may be in the ejaculate. Spermatozoa are also distinguished by the fact that they present signals corresponding to haploid and non-diploid cells. intact with clear hybridization signals are counted

Morphology and motility are currently the parameters used to identify the sperm that will be microinjected as part of an ICSI procedure. Spermatozoa with an abnormal morphology are also more likely to present aneuploidy, but this risk has not been clearly quantified.

Ryu et al. studied the frequency of aneuploidy in sperm of normal morphology in infertile patients who are candidates for ICSI and all carriers of a normal blood karyotype compared to fertile patients. The morphology criterion used was that of Kruger. FISH analysis of chromosomes 18, X and Y were performed. In the group of infertile patients, and aneuploidy rate was found varying from 1.8% to 5.5% compared to 0% to 2.6% in the control patients. This result shows that the morphology of the spermatozoa is not an absolute criterion for the selection of a genetically normal spermatozoon.

Note that the different reported figures of sperm aneuploidy in men without fertility problems vary between 0 and 5% depending on the studies, differences which may be due to the use of probes with variable hybridization efficiency or to the visual interpretation of signals.

In a recent review, the sperm karyotypes of men without spermogram abnormalities were analyzed, with the aim of looking for possible correlations with age and lifestyle. The results of some fifty studies combining data from sperm analysis by FISH from 500 men (more than 5 million spermatozoa) were compiled. The results are an average reported rate of abnormality of 0.15% for each chromosome and 0.26% for sex chromosomes. The majority of chromosomes had an even distribution of abnormalities, with the exception of chromosomes 21, 22 and sex in which the frequencies of abnormalities were significantly higher. Trisomies 21 and 22 are also the most frequently found in the products of spontaneous miscarriages, showing the link between chromosomal abnormalities in spermatozoa and abnormalities found in the embryo. This work also demonstrated a slight increase in the frequency of disomies with paternal age, mainly for the sex chromosomes, but no effect of smoking, alcohol and caffeine consumption.

INFERTILITY AND KYOTYPES OF SPERMATOZOIDS

It is reported that 23% of men with azoospermia and 5-10% of men with OAT have an abnormal blood karyotype, resulting in a high likelihood of producing aneuploid gametes. It is known, for example, that the proportion of gametes with a chromosomal imbalance can be as high as 50% in men carrying a reciprocal translocation. However, a normal blood karyotype does not exclude the production of aneuploid gametes. An abnormal intra-testicular environment can affect spermatogenesis, in particular by disrupting the mechanisms controlling chromosome segregation during cell division.

A defect in spermatogenesis can have many origins such as systemic disease, malnutrition, endocrine disorders, obstructive pathologies and genetic defects. Indeed, a large number of severe OATs and azoospermia have genetic etiologies, including microdeletions at the level of the Y chromosome, abnormalities of meiosis, and mutations in the cystic fibrosis gene. However, “idiopathic” OAT remains the diagnosis most often retained in male infertility, despite extensive investigations to try to determine its origin. The main interest in identifying an etiology with OAT lies in the evaluation of the prognosis and the risk of producing embryos with chromosomal abnormalities.

A large study is now the source of much controversy over the relationship between spermogram abnormalities and potential risks of chromosomal abnormalities in ICSI. Fertilization and pregnancy rates obtained in relation to parameters of sperm number, mobility and morphology of infertile men were retrospectively analyzed in 966 cycles of ART with ICSI. The results showed comparable ICSI successes independent of the magnitude of OAT parameters. They concluded that in the extreme, only a living sperm in ejaculate can be sufficient for ICSI to be successful. While this study was therefore very reassuring, it does not

In order to study the etiology of “unlabelled” OATs, Calogero et al. used the FISH technique to explore the rate of aneuploidy in sperm chromosomes 8, 12, 18, X and Y in one group of patients with teratospermia, another with OAT and a control group. They observed similarly increased rates of aneuploidy in the first two groups, which suggested that teratospermia may be the critical endpoint associated with aneuploidy. The authors, therefore, recommended that a FISH analysis be performed in cases of teratospermia, before any attempt at ICSI. These same authors performed another study to try to relate the rate of sperm aneuploidy in eighteen men with OAT and the results of ICSI in affected couples. For these cases of OAT, and overall fertilization rate of 95% and a pregnancy of 39% was obtained. Very curiously, this pregnancy rate was significantly higher than reported by multiple centers practicing the ICSI technique (the generally accepted average rate is around 25%), which the authors of the article do not discuss. The rate of oocyte fertilization by ICSI was independent of the rate of aneuploidy. On the other hand, the patients who had not had a pregnancy (91%) had significantly higher aneuploidy rates than those of the controls.

It can be concluded from these data that a high rate of aneuploidy in spermatozoa is associated with a low rate of pregnancy and therefore less success through assisted reproduction by ICSI. However, the rate of fertilization of the oocytes does not seem to depend on the rate of aneuploidy, which means that the transferred embryos are more often carriers of aneuploidies and that on the other hand, their implantation would be disadvantaged. In this context, genetic counseling following a FISH analysis of the sperm would be highly desirable, before a couple begins a long and difficult procedure of assisted reproduction by ICSI.

A particularly important point of these studies is that they make it possible to explain certain male infertilities so far called “idiopathic”. In fact, disturbances of meiosis or premeiotic mitosis during spermatogenesis could predispose to the non-chromosomal disjunctions that are observed. The next step would consist in identifying which are the genetic factors at the origin of these disorders of meiosis and mitosis and to characterize them to have one more diagnostic means available in idiopathic male infertility. If gene abnormalities predisposing to non-disjunctions were detected, this diagnostic tool would be available and the possible transmission in the offspring of this pathology would be evaluable. And then supported by numerous studies. We now know that at least thirty genes are involved in the control of meiotic and mitotic divisions. For example, the role of HspA2, a “chaperone” protein with a specific testicular expression that is thought to be involved in the synaptonemal complex has recently been demonstrated. The role of genes of the MAD (Mitotic Arrest Deficiency) family involved in premeiotic mitotic control is also discussed.

There is a case, recently reported in the literature, where FISH analysis of spermatozoa made it possible to pose a contraindication to ART. In the study in question patients with different types of absolute teratospermia (100%) were studied. One of them had a sperm morphological abnormality consisting of macrocephaly and multiple flagella. In this patient, 90% of the sperm analyzed by FISH presented aneuploidy. This result was considered to be a contraindication to ICSI.

In these various studies, between 3000 and 10,000 sperm per patient are analyzed. This represents a significant investment of time, considering that for FISH analysis on amniocytes, there are routinely between 50 and 100 cells. It is estimated that to detect significant levels of aneuploidy in sperm, an analysis of around 1000 cells may be sufficient. The method of collection is no different from that for a spermogram, and only a small fraction of ejaculate is used to smear onto slides for chemical treatment of the sample prior to FISH.

While the use of FISH on spermatozoa in male infertility appears undoubtedly valuable and contributory in the context of a pre-ART workup, or after repeated ART failures, the formal indications for this analysis have not yet been clearly established. established. One of the first uses of this approach could be to give couples undergoing a pre-ICSI procedure for OAT or azoospermia a more detailed indication of the chances of success and risks of miscarriages due to chromosomal abnormalities potentially present in the sperm. This information should then be communicated to patients within the framework of genetic counseling, taking into account the psychological repercussions of a possible poor prognosis of success.

Some authors also consider that this technique can be used in the event of miscarriages with repetitions of undetermined etiology beyond the framework of male infertility. Indeed, if 60% of the miscarriages of the first trimester are due to chromosomal abnormalities and a majority are of maternal origin, the FISH technique on the spermatozoa has shown a paternal origin in 8 to 12% of cases, corresponding to a greater incidence of chromosomal abnormalities in their gametes.