HOW TO DEAL ENDOMETRIOSIS PAIN NATURALLY?

CAN YOU OVERCOME PAINS FACED WITH ENDOMETRIOSIS?

Endometriosis is a gynecological disease that affects one woman out of 10. It is characterized by the development, outside the uterine cavity, similar fabric to that of the lining of the uterus (called the endometrium). ... It potentially affects all regulated women

Dawasante experts provide you with a natural herbal treatment without side effects to resolve your endometriosis problems as well as pain.

Click on the image below to discover this natural treatment 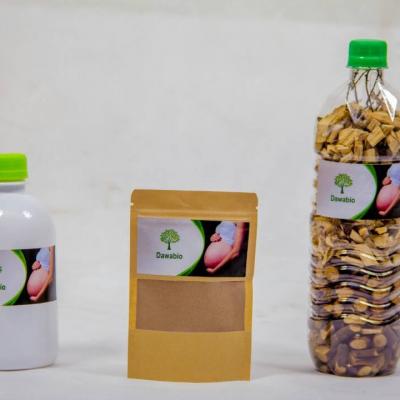 They can be multiple and related to the location of the disease, chronic or periodic, or completely absent in asymptomatic forms, and their intensity is not indicative of the severity of the lesions.

The most common symptom of endometriosis (found in 50 to 91% of women according to studies) is pain, painful periods (dysmenorrhea), pain during intercourse (dyspareunia), frequent pelvic pain, painful defecation, difficulty in urinating (dysuria), lower back, abdominal (umbilical) pain, pelvic or lower back pain which may radiate into the leg (cruralgia)

This pain is not a primary dysmenorrhea which passes with paracetamol. It is often a disabling pain resulting in total or partial disability for a few days.

It, therefore, seems incomprehensible that patients suffering from disabling pelvic pain since their first period are diagnosed after six years on average.

Pain associated with endometriosis can be continuous or occasional, depending on the location of the lesions and adhesions. Linked to the cycle, it often manifests itself more acutely during ovulation or menstruation.

NERVES TOUCHING WILL CONTINUOUSLY SEND THEIR PAINFUL MESSAGES TO THE BRAIN

A memory of pain develops in the transmission circuits (from the nerves to the brain). If the pain is not in the head and leaves the body well, the brain will nevertheless develop hypersensitivity which will increase the pain information and make it always present and sometimes even when all the lesions are removed by surgery.

Thus we open the chapter of neuropathic pain, chronic, which requires specific treatments often long-term (treatment for neuropathic pain, follow-up in a pain center, support by gentle therapies such as self-hypnosis, sophrology.

Pelvic pain is common with endometriosis

“Pain is the main symptom of endometriosis. Dysmenorrhea (pain during menstruation) and chronic pelvic pain are commonly experienced by women with endometriosis. These chronic pains can be the sign of a worsening of the disease ”.

In addition to the pain generated by the inflammation due to micro hemorrhages during the cycle, the loss of mobility of the organs is a source of pain. Indeed,  the particularity of endometriosis is to create adhesions  which will cause a retraction of the tissues. In addition, the small pelvis is a very innervated area. Therefore we understand that an endometriosis lesion, however small, will generate severe pain.

Ultimately, the affected and damaged nerves will continuously send their painful message to the brain

A memory of pain develops in the transmission circuits (from the nerves to the brain). If the pain is not in the head and leaves the body well, the brain will nevertheless develop hypersensitivity which will increase the pain information and make it always present and sometimes even when all the lesions are removed by surgery.

Thus we open the chapter of neuropathic pain, chronic, which requires specific treatments often long-term (treatment for neuropathic pain, follow-up in a pain center, support by gentle therapies such as self-hypnosis, sophrology, etc.).

Pathologies other than endometriosis are responsible for pelvic pain  with symptoms similar to those of endometriosis. This is particularly the case with pelvic congestion syndrome, polycystic ovary syndrome, irritable bowel syndrome, fibromyalgia. If an endometriosis assessment is negative despite the symptoms (but the assessment must have been done by a specialist), you must discuss with the doctor other possible pathologies.

Pain in the lower abdomen is the main symptom.

Some endometriosis is painless .

But when symptoms are present, the main manifestation of endometriosis is  pelvic pain (in the lower abdomen).
It is present in 3 out of 4 cases. The pain is not necessarily correlated with the importance of the endometriosis lesions, without knowing very well why.

Some women feel it during changes in position , others during  sex during penetration  (sometimes only before or during menstruation).

The pain can be permanent or occur episodically, including being punctuated by the menstrual cycle (occurring at the time of ovulation or menstruation).

Pain can also occur when a woman stops taking the pill .
Usually the pain is progressive and worsens over time.

In some cases, endometriosis does not cause pain but does  affect fertility.  His diagnosis is then made during a  sterility assessment  .

The presence of blood in the urine ( hematuria ) or in the stool (rectal bleeding) at the time of menstruation  are other possible symptoms.

Still poorly diagnosed, endometriosis is a disease that affects between 5% and 10% of women of childbearing age. It causes significant pain during menstruation, when cells similar to those of the endometrium, but which have developed haphazardly, react to hormonal variations.

Unbearable pain during menstruation or  intercourse , extreme fatigue, digestive problems, infertility and sometimes even  sciatica attacks ... These symptoms can indicate  endometriosis . A complex pathology that would affect one in ten women of childbearing age. Endometriosis is a poorly understood pathology which often leads to  misdiagnosis  : it takes between six and ten years before the correct diagnosis is made.

The female reproductive system is made up of a  vagina  and a  uterus  which continues on each side by two tubes, each leading to an ovary. One layer, the endometrium , lines the inside of the uterine cavity. During each  menstrual cycle , it reacts to ovarian hormones. Estrogens allow it to develop, while progesterone helps implant the egg in the event of fertilization.

If pregnancy does not occur, the surface layer of the endometrium and bleeding disintegrates in the form of  rules . Most of the evacuation takes place through an exit door located below. But in 90% of women, reflux occurs. Some of the blood and  endometrial cells  pass through various passages, especially between the tubes and ovaries, and then fall into the lower abdomen.

Normally, after a while, this blood and these cells are eliminated. But in women who develop endometriosis, for reasons still unknown, this "cleaning" is not carried out. Bits of endometrium attach themselves to areas where they shouldn't be. It can also be found in the ovaries,  bladder  or rectum, which explains the wide variety of symptoms. These pieces of endometrium have the particularity of reacting to hormonal fluctuations just like the endometrium, and trigger a  painful inflammatory reaction during menstruation .

This disease can also be painful even outside of your period. Because these lesions disintegrate over time and leave a scar which forms nodules. If they are close to nerves and located at the top of the vagina, they can trigger pain at any time, especially during intercourse. In advanced cases, real masses can develop such as  endometriomas ,  ovarian cysts ...

Endometriosis is a painful disease that progresses differently from one woman to another. Treatment will be different depending on the type and stage of the disease.

Screen for and treat endometriosis

Despite the sometimes disabling pain it causes, endometriosis is underestimated: on average, patients wait six years before a  diagnosis is made! Diagnosis involves ultrasound, sometimes supplemented by endopelvic (for ovarian cysts) or rectal ultrasound, supplemented by MRI. Hysterography or CT can be used. Laparoscopy, which allows biopsies and tissue analysis, is now performed only if surgery is required for the treatment.

One of the solutions to fight against endometriosis is hormonal treatment, using a continuous pill or an IUD. When this is not enough, medicines called Gn-Rh analogs can be given, which reduces estrogen levels in the patient's body. They then cause temporary chemical menopause and prevent bleeding from the lesions.

Often, endometriosis is unfortunately only diagnosed at a fairly advanced stage. Surgery can then remove the cysts and lesions caused by the disease.

Among the new surgical techniques: partial destruction of the cyst by burning it with laser or plasma energy (a kind of electric current). The plasma energy is being tested as part of a single clinical study in France.

A study that compared the laser (comparable method to plasma energy) with the classic cystectomy showed that the recurrence was almost the same in both cases (about 20%), but fertility is better preserved by the laser technique.

Endometriosis: operate with a robot

For women,  living with endometriosis means experiencing a painful but invisible disease on a daily basis, sometimes disabling and poorly understood by others.

In the EndoFrance association, meetings between patients are organized so that each can benefit from the experience of the others.

To have a maximum of oocytes to puncture, the patient must follow an  ovarian stimulation protocol . " In these patients, being able to  keep their oocytes , especially when they are young, when they do not have a partner, when they do not necessarily have an immediate child plan, and whose ovarian reserve is already weaker. that another patient of the same age, is really a prevention. This means that if we have a  stock of oocytes  and that we do a stimulation treatment for a child project to which she does not respond sufficiently, we can also use  frozen oocytes ", explains Pr Nathalie Rives, reproductive biologist.

Since 2011, this specific support has been increasingly offered. In 70% of cases, the patients succeed in making their maternity plan a reality  .

The  pains of endometriosis  are complicated to take care of because they can last after the establishment of a treatment or a surgery ... Even after their disappearance, the lesions can leave traces on the organs, the nerves , and continue to be painful. The mesotherapy and yoga  to manage pain smoothly.

Mesotherapy consists of shallow injections of products at low doses (an anesthetic and a muscle relaxant) on painful areas.

In addition, chronic pain is managed through the combination of "small means", in addition to medication. Hypnosis can be learned and facilitates the management of suffering: applying heat or cold to the painful area can provide relief; relaxation, like sophrology, is also a good help. Finally, psychological support is sometimes essential because chronic pain is physically and psychologically exhausting.

Endometriosis: the hope of ultrasound

When the lesions of endometriosis grow in size and reach the digestive tract, surgery may be used to remove the diseased tissue. But a team from the CHU de Lyon had the idea of ??developing an ultrasound-based treatment.

For many women, endometriosis affects the digestive organs such as the intestine and rectum. Until now, the only solution to treat these lesions was surgery with potentially serious consequences.

To avoid these after-effects and overcome the lesions, the Lyon University Hospital team had the idea of ??using an ultrasound device. A probe is introduced into the patient's rectum and is positioned opposite the endometriotic lesion. The only difficulty is that the probe used is not adapted to the female anatomy. Originally, the device was in fact reserved for the treatment of prostate cancer.

The ultrasound focused on the endometriosis lesions: " We will have a thermal effect at the focusing area that will rise to 80-90 degrees ," says Dr. Gil Dubernard, obstetrician-gynecologist. It only takes a few minutes to treat the lesions. Ultrasound does not make the nodule disappear, the idea is simply to necrose it.

Today, only about ten patients have been operated on as part of a clinical trial. And the results are very promising. Ultimately, ultrasound treatment could benefit several hundred women with endometriosis each year .