Ovarian cysts are sacs or pockets filled with fluid in an ovary or on its surface. Women have two ovaries; Each is the size and shape of an almond and is located on the side of the uterus. The ova (eggs), produced and ripe in the ovaries, are released in monthly cycles during fertile years.

Many women have ovarian cysts at some point. Most ovarian cysts do not present with much discomfort (or very little) and are not harmful. Most go away without treatment within a few months.

However, ovarian cysts (especially those that have ruptured) can cause severe symptoms. To protect your health, perform regular pelvic exams and familiarize yourself with symptoms that may indicate a problem that may be serious. 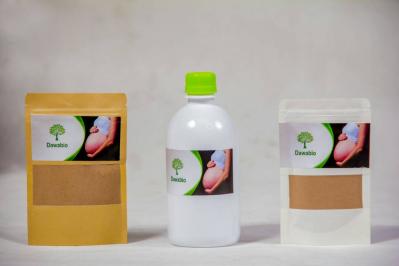 If you have polycystic ovary syndrome and are looking for a natural treatment that will cure you and prevent you from having the operation, this is the natural treatment for you. The herbal tea is made up of several herbs that regulate the hormone levels and the size of your cysts. Indeed, it contains several plants that will mimic the action of estrogen in your body.  It is the best natural remedy for curing ovarian cysts. Usually, except when the diagnosis is too late, our natural treatment will cure ovarian cysts without side effects.

To discover our natural treatment for ovarian cysts, click here!!!

Symptoms that indicate an ovarian cyst

Most cysts don't cause any symptoms and go away on their own. However, a large ovarian cyst can cause:

-Pelvic pain: dull or severe pain in the lower abdomen on the side of the cyst;

-Feeling of fullness or heaviness in the abdomen;

The causes of ovarian cysts

Most ovarian cysts occur after the menstrual cycle (functional cysts). Other types of cysts are much less common.

Structures similar to cysts, called "follicles," usually develop every month. The follicles produce the hormones estrogen and progesterone and release an egg when you ovulate.

·          Follicular cyst  Approximately in the middle of the menstrual cycle, an egg leaves its follicle and passes through the fallopian tube. A follicular cyst begins when the follicle does not break or release the egg, but continues to grow.

-          Corpus luteum cyst.  When a follicle releases the egg, it begins to produce estrogen and progesterone for conception. The follicle is now called the "corpus luteum". Sometimes fluid collects inside the follicle, which causes the corpus luteum to expand and a cyst to form.

Functional cysts are usually harmless, rarely cause pain, and usually go away on their own within two or three menstrual cycles.

Types of cysts that are not related to the normal functioning of the menstrual cycle are:

·          Cyst dermoid.  These cysts, also called "teratomas", can contain tissue, such as hair, skin or teeth, because they are formed from embryonic cells. They are usually not cancerous.

·          Cystadenomas  These form on the surface of an ovary and may be filled with a watery or mucous material.

·          Endometriomas  They are formed as a result of a disease in which uterine endometrial cells develop outside the uterus (endometriosis). Some tissue can adhere to the ovary and form a lump.

Dermoid cysts and cystadenomas may be enlarged, which can cause the ovary to move out of its position. This increases the possibility of a painful torsion of the ovary, called "ovarian torsion". Ovarian torsion can also cause blood flow to the ovary to decrease or stop. In fact, ovulation is the release of an egg from one of the ovaries. It usually occurs in the middle of the menstrual cycle, although the exact time may vary.

In preparation for ovulation, the uterine lining, or endometrium, thickens. The pituitary gland in the brain stimulates one of the ovaries to release an egg. The wall of the ovarian follicle breaks on the surface of the ovary. The egg is released.

If the egg is fertilized, the egg and sperm join together and form a single-celled entity called a zygote. When the zygote moves down the fallopian tube into the uterus, it begins to divide rapidly and forms a group of cells called blastocysts, which looks like a small raspberry. When the zygote reaches the uterus, it is implanted in the uterine lining and pregnancy begins.

If the egg is not fertilized, the body simply reabsorbs it, perhaps even before reaching the uterus. About two weeks later, the lining of the uterus breaks off and is expelled through the vagina. This is called menstruation.

The risk of having an ovarian cyst increases due to:

·          Pregnancy:  Sometimes the cyst that forms when you ovulate stays in the ovary throughout the pregnancy.

·          Endometriosis:  This condition causes uterine endometrial cells to grow outside the uterus. Some tissue can adhere to the ovary and form a lump.

·          A severe pelvic infection:  If the infection spreads to the ovaries, it can cause cysts to form.

I have cysts and I'm pregnant… Is it time to panic?

Ovarian cysts are common in early pregnancy, even if you are not having your period. Usually, these cysts are harmless, just like most other ovarian cysts.

· However, if the cysts continue to grow throughout your pregnancy, there are a few possible problems. They can break, twist, or even cause problems during childbirth. This is one of the many reasons why it is important to stay under the care of an obstetrician/gynecologist during your pregnancy and throughout your life.

- If you have polycystic ovary syndrome you are at increased risk for gestational diabetes, pregnancy-induced high blood pressure, miscarriage or premature delivery.

· Talk to your OB / GYN about your risks and potential treatment options. She will provide you with a full set of options and recommend the best treatment to help you have the healthiest pregnancy possible.

Ovarian cysts: what consequences before pregnancy?

Ovarian cysts: what consequences during pregnancy?