Keloids: cause, medical and natural treatment

A keloid scar is an increase in connective tissue that forms at the site of a violation of the skin. Such formations are not only a cosmetic defect but can also lead to limited mobility. Both sexes, male and female, are equally prone to forming keloid scars. The main age group, prone to the appearance of keloid scars, is 10 to 40 years. As a rule, the keloid appears much less often in childhood and old age. 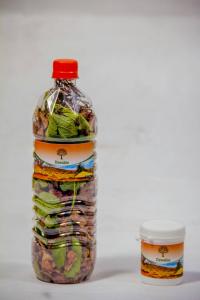 If you have keloids, there are two ways you can get rid of them. Either you can reduce them with surgery or you can opt for natural treatment. Conventional treatments like surgery have several drawbacks. They are ineffective, they are expensive, and keloid scars tend to recur even after surgery. Our natural treatment to remove keloids consists of 2 elements: an ointment and herbal tea. Anti keloid ointment is a gentle, yet very effective, natural remedy for keloid removal. It contains plants that help regenerate the skin, which is excellent for the natural treatment of keloids. As for the herbal tea, it helps strengthen the action of the ointment. It is a natural solution to get rid of keloids without surgery. To discover our natural solution against keloids clicks here!

A keloid scar is not a well-understood phenomenon and the causes of its appearance are unknown. Typically, wounds heal for about a year. The completion of this process is the formation of a mature scar. But sometimes this healing process is disrupted. Keloid scars begin to develop within 0.5 to 3 months of the onset of the wound and continue to grow even 6 months after injury.

A keloid scar can form anywhere on the human body, even from a minor injury. In this case, the nature and size of the damage itself is in no way associated with the likelihood of a scar.

They occur at the site of skin lesions, for example, after operations, burns, piercings, acne. The reason for their appearance is the proliferation of connective tissue. As a rule, these scars are reddish in color, rough, may increase over time, and itching is unpleasant.
It is not always easy to predict exactly how the skin will behave after damage, but there are some prerequisites for the formation of this type of scar.

- The main reason for keloid scars is genetic predisposition when an increased content of the enzyme responsible for collagen production is observed in the human body. Excessive protein intake can also affect the formation of keloids, such as, for example, with sports nutrition or active consumption of meat.

Development of a keloid scar

The formed keloid scar is not dangerous to human health but can bring discomfort, both psychological and physical. These scars are unable to go away or diminish independently, even over time. Damage to the keloid scar itself should be avoided, it can lead to increased scar size or worsening of the disease.

Treatment of keloid scars is selected individually in each case. This may include local therapy when pressure dressings are applied to the scar site. In this way, the formation of an unpleasant scar can be avoided.
In addition, drug therapy is carried out: the use of ointments, gels, and drug therapy with the introduction of corticosteroids under the skin at the site of scar formation. These hormones contribute to the reverse development of keloid tissue and, as a result, a decrease in the scar.
Physiotherapeutic methods of treating keloid scars are widely used, among which are electrophoresis and ultraphonophoresis .mesotherapy is also effective - the injections of nutrients into the scar surface. These meso cocktails soften the coarse tissue and help it absorb.
If conservative methods are ineffective, resort to surgical intervention - scar excision.

- If it is enough to reduce the thickness of the scar, the doctor will recommend that you resort to laser resurfacing, there are devices for this in cosmetology clinics. This is exposure to the skin with a laser beam. It is best to perform such polishing in the fall or winter so that the laser exposure area does not subsequently fall into the sun.

Such resurfacing helps to make the scar more even and get rid of the dark color of the scar. The number of procedures and the type of laser are selected individually, depending on the complexity of the keloid scar.

Surgical correction is usually indicated for rough scars. During this operation, the surgeon dissects scar tissue and tightens the edges of the wound with thin sutures. If the operation is successful, only a threadlike mark 1 to 2 mm thick will remain on the skin. This type of correction is popular, for example, in women who are embarrassed by a scar after a cesarean section.

Keloid scars are also combated with physiotherapeutic methods. The most popular of them:

Phonophoresis involves the introduction into the body of active drugs using ultrasonic vibrations. With electrophoresis, preparations containing lipase and other enzymes are impregnated with special buffers. In each of them, an electrode is then fixed. They are placed on the problem area for several minutes. Since the current discharges are weak, a person feels only a slight tingling sensation in the scarred area.
A similar method is the use of micro-currents. Weak discharges gently affect both the outer layer of the skin and the deeper layers, vessels, and muscles. Due to this, metabolic processes in the tissues are started, the microcirculation of blood and lymph improves.
However, plastic surgeons warn that it is risky to prescribe a method to treat a keloid scar on your own. Before signing up for a particular procedure, you need to consult a specialist, since many physiotherapy procedures, on the contrary, can promote the growth of a keloid scar.